‘Tis the Season for Giving 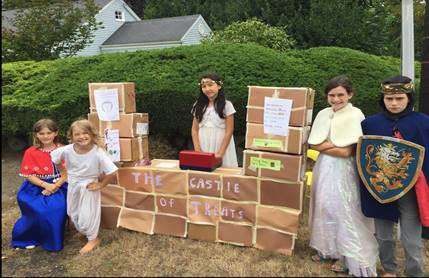 Most children hold lemonade stands to just fill their piggy banks but not these young girls.

They were raising money for something extra special, in hopes of using that money to help moms and babies in need. And that is exactly what they did.

These six, young girls-Lizzy, Gabby, Abigail, Sophia, Penelope and Agnes-were about to make a difference. As they brainstormed for their new lemonade business, the girls immediately agreed they weren’t going to keep the money they earned. They wanted to give it to Care Net.

After spending their own money to buy supplies, they began baking cookies, brownies and cupcakes as well as mixing up a batch of delicious lemonade. But these girls were not about to make this any ordinary lemonade stand. They wanted their stand to be special. Gabby had read in a kid’s magazine about building castles out of cardboard. So, they went around the neighborhood, collecting unwanted boxes to create their castle. Once the castle was ready, the girls donned medieval dresses and went to work.

As they served sweets and poured lemonade, customers asked what they were doing with the money, and when they explained they were donating it to Care Net, people often paid them extra. The girls shared in disbelief that one guy even paid $14 for a $1 brownie!

After working two, six-hour days, the girls had netted $100 so Lizzy, Gabby and Sophia excitedly walked into Care Net with one envelope of money and three big smiles.

When asked “Why is Care Net important?”, the girls explained, “Care Net helps moms who don’t know how to take care of babies, and that is really special. And the moms get to learn about Jesus at the same time!”

To anyone who can’t donate money, the girls stated, “People can give diapers, baby items and baby clothes. They can help organize stuff and tell other people about it so they can help too. And if you have a talent like sewing [knitting] and you are wondering ‘How is this glorifying to God?’ you can sew stuff for Care Net and then wow! It is so glorifying to God!”

Thank you, girls, for what you have done to make a difference for moms and babies!